Phonological awareness begins in the womb at about 24 weeks. Babies neurological pathways in the brain support and help the development of their language skills. Through sound pattern information storage and understanding body language, facial expressions and gestures they will develop the skills and ability to communicate, socialise and play with others. 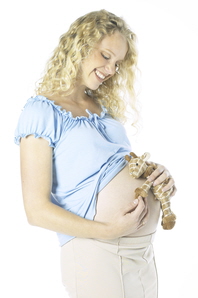 It is suggested that reading, talking and singing to your unborn child in the same manner you would to a baby or toddler could help to begin the sound storage/recognition process. Like many parents who have their children close together (14 months in our case) the second child’s language skills seemed to develop earlier than the firsts. This may have been because the book sharing time with our first (who was about 5 months old when I fell pregnant again) and the type of language we were using stimulated our unborn second child.

So talk to your baby even before they are born, they will not understand what you are saying but their brain is busy; starting to store sound information that will later help them to understand language and learning to speak.

Babies initially have no language preference, they respond only to the sounds and facial gestures and mouth shapes that accompany them.

Try to expose them to a greater range of sound experiences as they develop their awareness of sounds around them. The more they hear and the associations they make to those sounds (what they see, feel, experience) the greater their ability to distinguish between them. This skill becomes important later on as they begin to isolate individual words in sentences, being able to distinguish between words that sound similar such as dog and hog.

By 6 months old linguists can tell, by the cooing and babbling that your child is producing, what range of language you have shared with them through ‘Direct Talk’.  The cooing and babbling sounds your baby or toddler makes are their first steps towards expressive language, producing the sounds that eventually form words.

A baby who can talk through cooing and babbling is more likely to initiate and continue verbal interaction and play with you and others. The first cooing sounds represent more vowel sounds such as ah, ooh, eee, uh, ah-ee, while the later babbling stage is more consonant sounds repeated such as ba, ba, ba, da, da, da ,ma, ma, ma, ga, ga, ga.

At about 7 months old your child is now recognising words and developing an understanding of what these words mean (receptive language).

Talk to your baby, talk all the time, about what you are doing, what is going on and just about how wonderful and beautiful they are.

How you talk to your baby also has an impact; research has shown that babies prefer you to talk to them using regular words (normal adult vocabulary) in a slightly higher pitched and more sing-song way. Although many adults do this naturally when talking to babies it has become known as 'Parentese' and is very different from 'Baby Talk'.